Up until recently, Panama had never really been high on my travel radar. But when watching the Islands episode of BBC’s Planet Earth II, I was instantly captivated by a scene where a pigmy sloth, in search of a mate, is shown swimming in the turquoise-tinted waters of Caribbean Panama.
After that moment, I knew The Isthmus was a place I needed to explore.
Situated between Costa Rica and Colombia, Panama is often seen as a vital part of the trade economy and an important link between North and South America. Due to its recent banking boom and ownership of the Panama Canal, the country has seen an influx of revenue (it can cost a large commercial ship up to $150,000 to pass through the canal), and as a result, makes the modern skyline look more like New York City as opposed to one that you would see anywhere else in Central America.
The ultra-modern Panama City skyline seen from the Old Town (Casco Viejo) 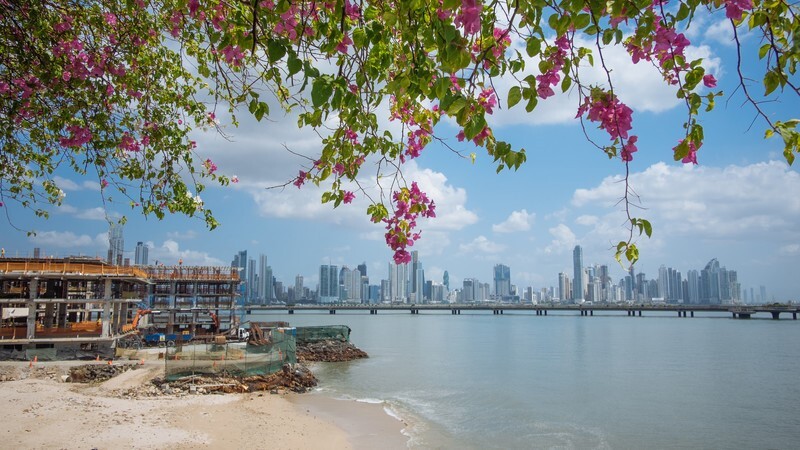 From island hopping in the Caribbean’s Bocas del Toro to watching an enormous passenger ship pass through the iconic canal, there is so much diversity offered in the land (and seas) of this country.
Here are some highlights:
An archipelago in the Caribbean: Bocas del Toro
Whether you’re into surfing, snorkeling or simply unwinding by the beach, the archipelago of Bocas del Toro is an ocean lover’s tropical paradise. My Intrepid group stayed on Isla Colon, the main town of Bocas which is sprinkled with inviting bars, restaurants and supermarkets.
On our free day, a few Intrepid travelers and I opted to explore one of the surrounding islands, Isla Carenero. 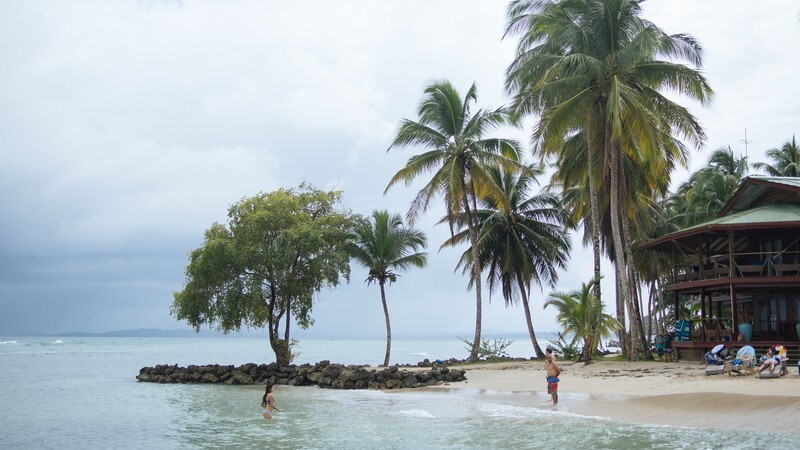 Intrepid travelers take a dip in the warm Caribbean waters
We stopped for delicious vegan fare at Leaf Eaters Café (the chocolate cake is a must-try!) before walking around the island where we found a spot to watch surfers take on waves as we chilled on a palm-shaded beach. The easiest way to get around the islands is to catch the local water taxis at the docks, where a buzzy ride shouldn’t cost you more than a couple of dollars.
The emerald highlands: Boquete
After a bus journey from Bocas del Toro we arrived in Boquete, a scenic town in the highlands that sits 1,200 meters above sea level. As we steadily climbed in altitude towards our lodge, we found ourselves in a cloud forest and in awe of the panoramic views of the emerald green mountains surrounding us. In the distance, we caught glimpses of Panama’s highest peak, Volcán Barú.
The following day, our Intrepid group were up early in the morning to take a day trip to Caldera. We relaxed in natural hot springs and enjoyed a typical Panamanian lunch consisting of grilled chicken, rice and beans, a coleslaw-like salad and plantains before a short hike to Jagar Waterfall where we plunged into a swimming hole beneath the falls.
Waterfalls in Boquete 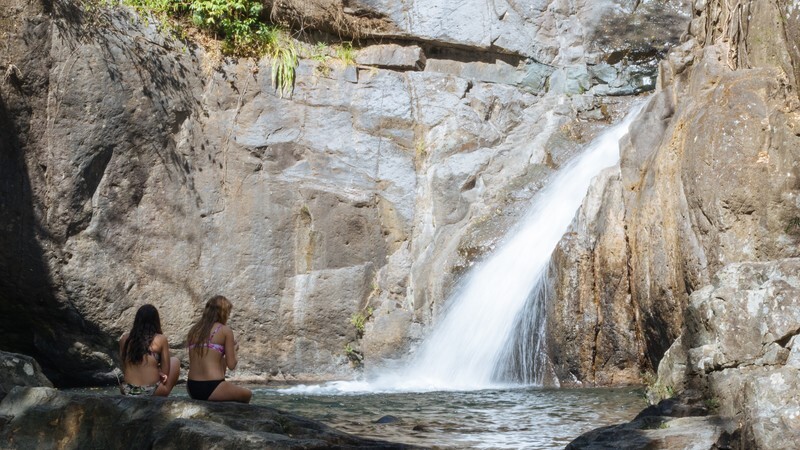 The hidden gems of Central America: Santa Catalina and Isla Coiba
After a few days in the highlands, it was time to set off for the seaside again – this time the Pacific side. We arrived in Santa Catalina after a five-hour bus ride and with the beach being just a short 400-meter walk from our accommodations, we decided to go for a swim.
That balmy afternoon we watched hermit crabs scurry away from the incoming tide on the vast black-sand beach and looked on as top-notch surfers scored perfect waves while golden-hour light poured upon us right before sundown. The abundance of such high-calibre surfers was no surprise; Santa Catalina is known for its consistent swell, attracting wave chasers from all over the world.
If you’re not a surfer, there’s the option to hop on a day tour that goes to Isla Coiba (which the majority of our Intrepid group did) and snorkel with reef sharks, turtles, spotted eagle rays and giant bait balls of fish. All in crystal clear, warm water. I was hesitant to decide if I’d surf or swim on our free day, but choosing to snorkel was definitely one of the top highlights of my trip as getting to see sharks, rays and turtles in their natural habitat is not something that comes by on a regular basis! 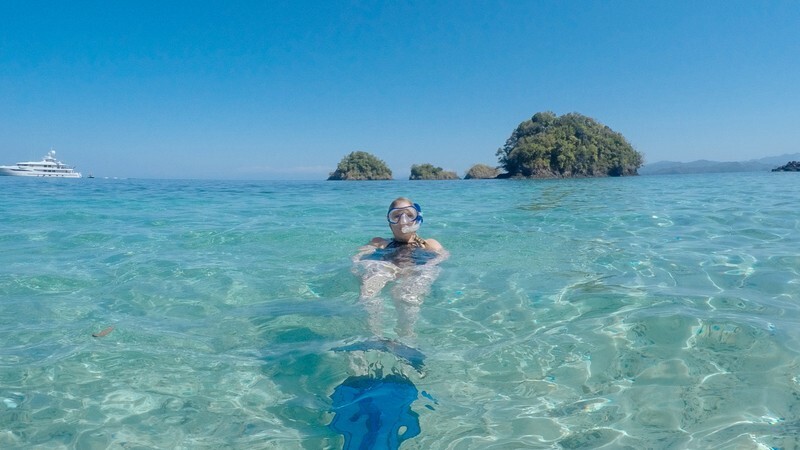 Where the old world meets the new: Panama City
I had just spent almost a month traveling overland from Guatemala all the way to Panama where we passed through charming colonial cities and laidback beachside towns, so when I first caught a glimpse of the tall skyscrapers that formed the extended skyline as we approached Panama City on the highway, it was a bit of a shock to the system! The number of cars, trucks and people we passed on our way in was nothing like I had seen in weeks, and the noise of it all made me reminisce the tranquillity that we had experienced just a day before. My senses did eventually adjust and after we arrived and checked in, I was excited to hit the streets and see what life in one of the most modern cities in Central America was like for myself.
A couple of Intrepid travelers and I decided to check out the Old Town (Casco Viejo) which is the historic part of the city. In this stylish little neighborhood, you’ll find old colonial houses, crumbling pastel-colored facades and hip cafes and bars. It was definitely the place to be. I could say that it was by chance that we chose to visit Casco Viejo instead of the more modern part of the city but looking back at it, we were probably subconsciously drawn to the charming, old-world feel we had experienced throughout Central America and knew that this was the last dose of it!
Before leaving Casco Viejo, we visited the Interoceanic Canal Museum where we learnt about the history of the Panama Canal before making our way to the Miraflores Locks. 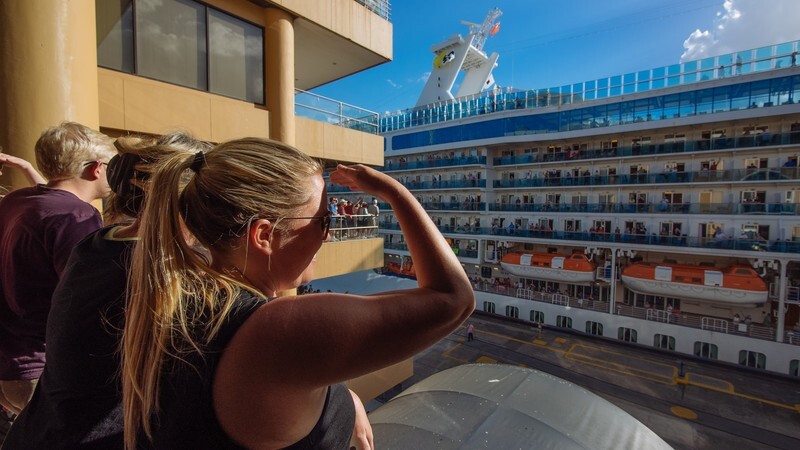 Intrepid travelers watch a passenger ship pass through the Miraflores Locks in Panama Canal
Crossing the canal can be an expensive toll for large commercial and passenger ships, but it can save a voyage approximately 7,800 miles (that’s months at sea!) by bypassing the trip around Cape Horn in South America.
Just before the sunset, we watched a large passenger cruise ship pass through the canal as we toasted to our last night of a memorable journey together.